As the situation in Baltimore unravels it is essential to revisit the discourse on non-violence and solidarity. 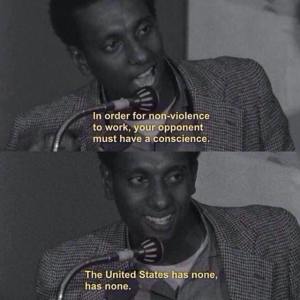 It seems that as the situation escalates in Baltimore many have scurried to their social media accounts to express their opinions on the course of action to be taken. Unfortunately, it seems that a good portion of those projecting their beliefs of peaceful resistance are not part of the Baltimore community, nor are they part of the subjugated groups oppressed by police brutality.

Although it is vaild to have personal beliefs of peaceful resistance, it is not legitimate to project those beliefs onto those struggling on a daily basis and expressing their frustration in the streets in the manner they see fit.

Police brutality and racist judicial procedures precede the mobilization in Ferguson, Baltimore, Saint Louis and other places that have risen up against injustice. The violence began with the ethnic cleansing of the Americas by white colonialists on the backs of the African community over the blood of the Natives of this land.

Through dictating to the oppressed how to fight the oppressors, we too are stripping them of their voices. The people possess every right to express their frustration in any way they see fit against the oppressor. It is a choice evoked by a necessity.

The attempts peddle around the situation and justifying the dictation under the emblem of thinking pragmatically and strategically in order to fight the oppressor further inferiorizes the oppressed; in a sense of presenting their inability to assemble themselves and resist. There is nothing pragmatic about oppression other than the dehumanizing, humiliating and controlling of the marginalized communities.

On the other hand, if some of the individuals within the marginalized communities believe that the manner in which mobilization should occur is through peaceful means, it too is their right. That being said, it is vital and essential to remember that no form of resistance is exclusive of the other. Rather they combine in a collective effort in order to bring forth justice. Not peace. Justice.

When justice is served, then we can move towards a peaceful and congruous society. However, as long as individuals are being killed based on their ethnicity, race, and beliefs justice must first be served.

While this violence appears to be coming as an abrupt act, it has been ongoing for decades and centuries. The media has covered it from the angle of the oppressor, portraying the oppressed as barbaric aggressive groups, rather than a suppressed people voicing their disgruntlement with the status quo, refusing to continue to die in the name of a farce of a justice system.

As a Palestinian, although there are parallels between the struggle of the black community and the Palestinian struggle, it is not the same. Suffering is not the same, nor is it to be placed on a metric. Any group struggling can draw solidarity and hope from one another, but we, the struggling communities should too listen to one another. We should not project our struggle onto others.

It is essential to listen.

Respect and solidarity with all peoples fighting against oppression, from Peru to Bahrain, to Yemen, to Syria, to Palestine, to Egypt, to Brazil and all other communities fighting.

One thought on “Revisiting non-violence and solidarity”

Other posts by Mariam